Part 1:
Blockchange Primer – Introduction to a Rapidly Evolving Technology and Its Potential for Enabling Social Change

Blockchain is a complex and emerging technology, and its potential for creating positive social change has led to innovation, optimism, hype, and confusion in equal order. In Part 1, we seek to provide a brief primer on blockchain and the potential for using the technology to create Blockchange. This primer comprises a curation of illustrative quotes from experts regarding blockchain’s capacity to create social change, a glossary of key terms relevant for this Blockchange study (with a focus on identity), and a curation of blockchain guides to provide the type of technical and operational understanding needed to engage with the field.

The following quotes seek to provide an illustrative sample of expert viewpoints regarding the potential of blockchain to succeed (or fail) in creating positive social change.

“While blockchain's best-known, most used and highest-impact application is Bitcoin, the potential impact of the technology is much greater and wider than virtual currencies. Indeed, since other applications can 'piggyback' the Bitcoin blockchain, the biggest impacts of Bitcoin may be found outside the currency domain.”27

“Blockchain technology could simplify the management of trusted information, making it easier for government agencies to access and use critical public-sector data while maintaining the security of this information.”28

“The blockchain could offer people access to alternative currencies, global markets, automated and trustless transactions systems, self-enforcing smart contracts, smart property and cryptographically activated assets, and innovative models of governance based on transparency and corruption-free voting. Combined, these elements could be used to promote individual freedoms and user autonomy. Regardless of nationality, people could be granted equal access to basic digital institutions and infrastructure such as decentralized laws, markets,judiciaries, and payment systems, which can be customized to each country’s, group’s, and individual’s needs.”29

Authors, Blockchain and the Law: The Rule of Code

“…[W]hat if there were not only an Internet of information, but an Internet of value. Some kind of vast, global, distributed ledger running on millions of computers and available to everybody, and where every kind of asset from money to music could be stored, moved, transacted, exchanged, and managed, all without powerful intermediaries."30

“Blockchain technology will not solve all government problems, but it can help curb corruption and instill trust in government.”31

Head of Innovation for Citizen Services Division at Inter-AmericanDevelopment Bank

“The blockchain is a disruptive technology with a tremendous transformative potential for our societies. Risks and benefits related to its possible applications, however, must be carefully weighted, avoiding utopian expectations, as well as the pitfalls of technocratic reasoning and determinism.”32

“...blockchain is one of the most overhyped technologies ever….Ultimately, blockchain’s uses will be limited to specific, well-defined, and complex applications that require transparency and tamper-resistance more than they require speed – for example, communication with self-driving cars or drones. As for most of the coins, they are little different from railway stocks in the 1840s, which went bust when that bubble – like most bubbles – burst.”33”

Technology in Search of a Use

“Blockchain is not going to solve all your problems for you,.…You're a hammer-thrower just looking for nails.” [When you have technology in search of a use] "you end up with crap that we see out there in the enterprise today."34

This glossary of terms is provided to set the stage for the following sections – particularly our examination of blockchain’s potential for creating social change in the identity space – and to clarify a number of important concepts with multiple or contested definitions.

A distributed ledger is essentially an asset database that can be shared across a network of multiple sites, geographies or institutions. All participants within a network can have their own identical copy of the ledger. Any changes to the ledger are reflected in all copies in minutes, or in some cases, seconds.

Social change is the significant alteration of social structure and cultural patterns through time.

Identity is “an attribute or set of attributes that uniquely describe a subject within a given context.”

Digital identity is the unique representation of a subject engaged in an online transaction. A digital identity is always unique in the context of a digital service, but does not necessarily need to uniquely identify the subject in all contexts.

National Institute of Standards and Technology38

Identity and access management (IAM) is the security discipline that enables the right individuals to access the right resources at the right times for the right reasons.

Identities that “evolve out of a single use case, such as voter ID, health records, or bank cards, and have potential for use across sectors.”

Foundational systems…are intended primarily to provide identity as a public good, not to supply a specific service. Foundational systems are typically owned and operated by government institutions, aim for national coverage of their population, and provide credentials that function as an official ID. Foundational ID systems can also underlie multiple functional purposes.

A blockchain is a distributed database that seeks to solve problems of trust, transparency, and accountability during a transaction or interaction between two parties. Using advanced cryptography, each block of data is sequentially added to the chain across a network of computers, or nodes. Thus, the information is not only decentralized but also distributed, which means no single person or entity controls the system, yet everyone (at least in a permissionless, public blockchain) can use and help run it. Distributed ledger technology frameworks intend to eliminate the need for and reliance on central authorities such as banks, large enterprises and governments as intermediaries in a wide array of transactions. 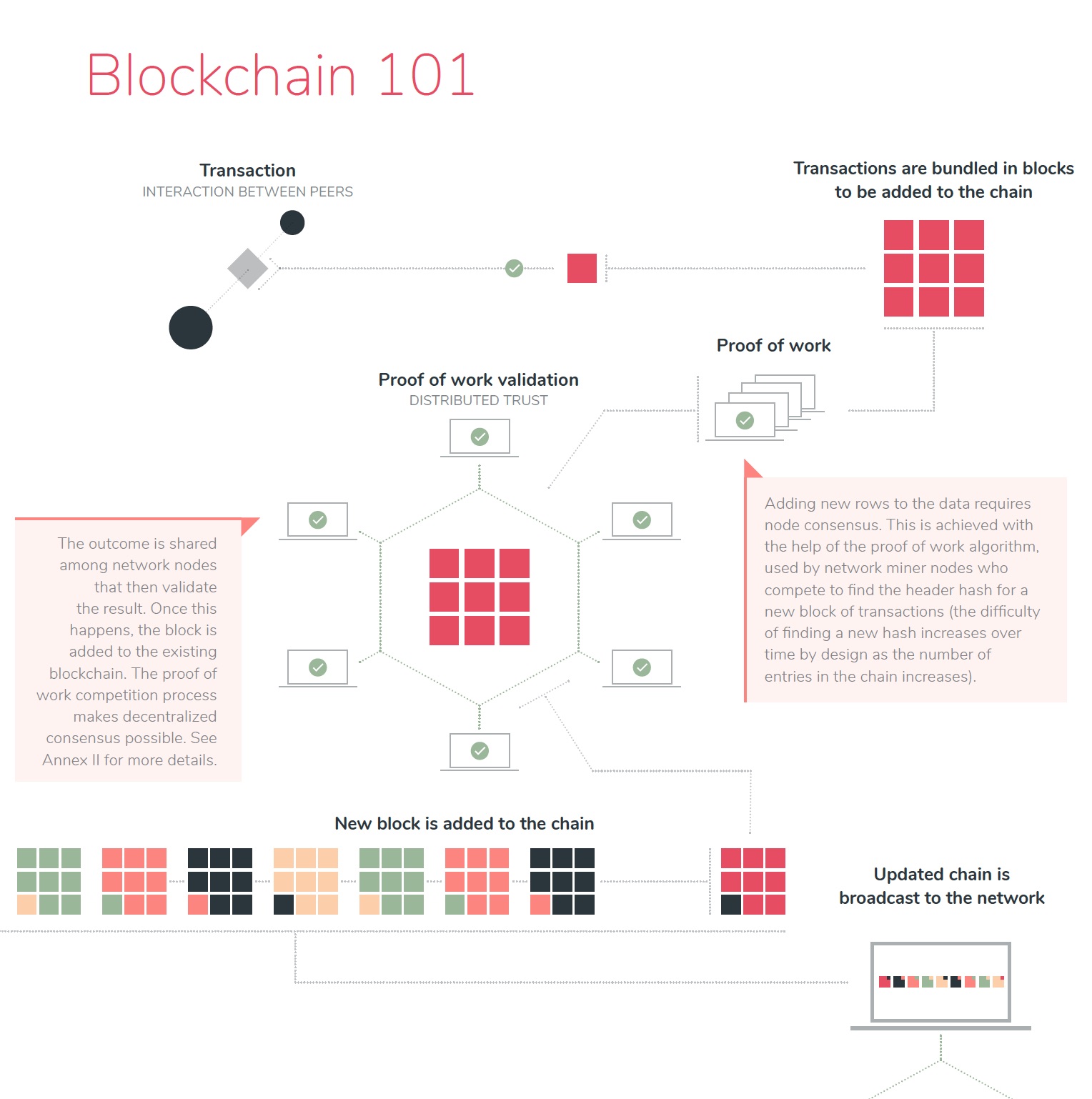 Although the preceding short introduction provides essentially all of the technical and operational information needed to understand this field report, the following curated list of blockchain guides includes a number of deeper explorations of blockchain; blockchain protocols; current applications, especially in the business world; technical guidance; and other DLTs.

What is Blockchain Technology? A Step-by-Step Guide for Beginners

Blockgeeks’ Guide provides an overview of the central characteristics and defining principles of blockchain technology.

What is Blockchain Technology?

CoinDesk’s introduction to blockchain technology includes an index of FAQs related to Bitcoin, Ethereum, and other cryptocurrencies.

CIO Explainer: What Is Blockchain?

This Wall Street Journal article gives a holistic overview of blockchain – how it works, how it started, how it can be used, the challenges it faces, and the contemporary ecosystem (as of 2016).

A Complete Beginner’s Guide To Blockchain

This short article from Forbes explains the basics of what blockchain is, how it works, and why is it important.

An introduction to blockchain that includes videos on the history of double-spending in finance and how hashing works within cryptocurrencies.

In this brief video, Professor Lakhani explains the fundamentals of blockchain and why they are important across industries.

A simple guide to Bitcoin

This piece from Wired focuses especially on key bitcoin fundamentals such as mining, how to buy bitcoin, exchange security, volatility, and 51 percent attacks.

What is Ethereum? A Step-by-Step Beginners Guide

Blockgeeks’ Guide explains what Ethereum is, how it works and what it can be used for.

A Beginner’s Guide to Smart Contracts

Blockgeeks’ Guide explains what a smart contract is, how it can be created using blockchain, and examples of how smart contracts could benefit various industries.

Are you ready for blockchain?

This Thomson Reuters report details a number of blockchain projects, provides insights from blockchain applications across different industries, and considers which blockchain use cases will become mainstream.

How blockchain will radically transform the economy

A TED talk on how blockchain technology can be applied in the real world and create changes in the economy.

How the blockchain is changing money and business

A TED talk that aims to demystify blockchain and explain how it holds the potential to transform money, business, government, and society.

The original bitcoin whitepaper from Satoshi Nakamoto describes the digital currency as a solution to the double-spending problem by creating a peer-to-peer network. Interestingly, there is no specific mention of “blockchain” throughout the entire paper.

Learn Blockchains by Building One

This article from Hacker Noon takes readers through the step-by-step process of building a blockchain.

An Introduction to Ethereum and Smart Contracts: Bitcoin and the Blockchain

This piece from DZone explains (in a technical manner) how Bitcoin, Ethereum, and smart contracts mitigate the problem of double-spending.

Open Matters: Why Permissionless Blockchains are Essential to the Future of the Internet

This article from Coin Center explains the difference between permissioned and permissionless blockchain and how they manage consensus mechanisms in different situations.

Beyond Blockchain: Other DLTs

This Forbes article examines Hedera and IOTA – two DLTs that do not use a traditional blockchain; both the IOTA Tangle and Hedera Hashgraph are based on the mathematical approach called a directed acyclic graph (DAG).

This working paper compares the most notable differences between Hyperledger Fabric, R3 Corda, and Ethereum, toward providing decision-makers with insight on what use cases are most suitable for each DLT.

Attributes and Use Cases

This is an example footnote! This is a link
close